I haven't been here for so long I see things have changed, and not everything posted before is still here. Going to just experiment a little today to see what it's like now...


Posted by Joyce No comments:

Just look at that glaze!

I thought my newest love affair with the high-fire Porcelain had about run it's course... though I do really like the almost transparent look where it's thin, and the over-all delicate look to the pieces compared to earthenware (or low-fired Porcelain), I was frustrated with the color palette of the high-fire glaze.  As in, not much richness of color, and not many choices.  I had started using some underglaze color to liven things up in the previous set of items, but that has problems too, because at the higher temperature, much of the color evaporates or runs... The porcelain has not gone over well with buyers either, so except for a little more experimenting, I was going to stop working in porcelain for a while, this was the last set before taking a break....

When I first glanced at my most recent set of porcelain pieces I was a little disappointed.  I was also on my way out the door, so didn't really get a good look at the things.  So imagine my delight when I took a closer look later in the day!  These two pieces have a low-fire glaze on them, (just to see what would happen), and look what happened!  It looks like Agate stone!  The pictures are not showing just how cool these pieces look, I'll get out the camera stuff and take some proper pictures later.  Hopefully the almost transparent spots will show up in a photo, the glaze colors go from pale Blue to pale Green to Pink, then White, then almost gone completely where you feel like you're seeing right through the piece!

Maybe I will be doing a little more experimenting with the Porcelain before moving back to the more popular earthenware... 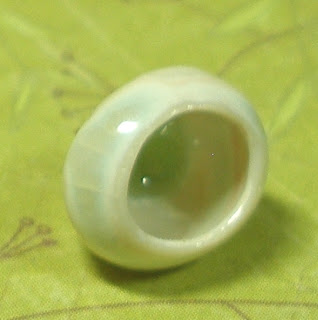 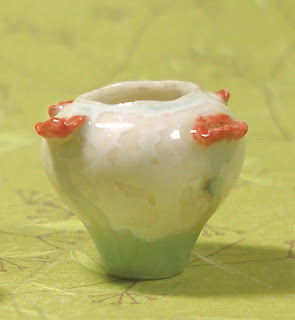 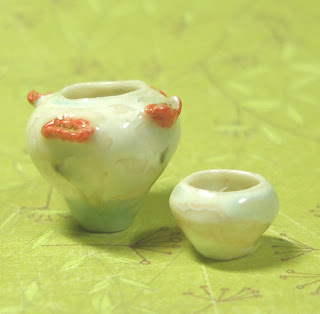 Today when I went to the front page of Etsy, I saw this blog post of interest: 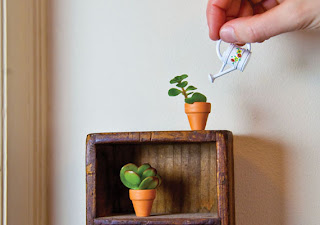 What a clever idea! I'm thinking of making some containers for miniature live plants to see if this could be a new product line for people who possibly weren't interested in miniature pottery before.

As far as live plants go, I am a murderer of such things and will need a little help in this department. I currently have only one Spider plant given to me about a year ago. All other house plants have been either neglected or over-watered to death... I might see about air plants. What could I do to them?

Well, we have our feet fully into the new year now, and though I didn't make any particular resolutions, I have wanted to keep my "year in miniature" on track. Over the past few weeks I have been giving high-fire Porcelain a try and found I really like the looks of it with the most recent set of items. I listed the new things on Etsy yesterday, and should know if other people like the Porcelain items by the end of the week. 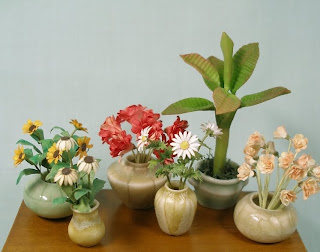 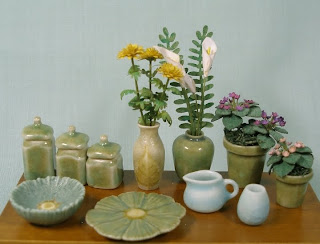 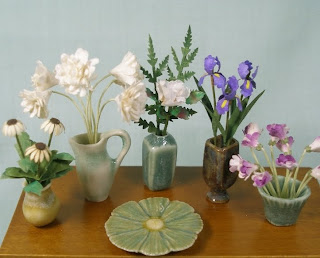 My personal dollhouse town is still in the fantasy mode. I have spent many hours browsing around Etsy and eBay getting sparks of ideas, and am pretty sure I will be making the Bar/Tavern/Hang Out first. In my mind I have it all mapped out, even a way to have lit candles on some of the tables... whether any of these plans will really work or not, I will have to wait and see :)

Tiny Taste of Halloween in Miniature

I've been in a Halloween mood all week, had a great party to go to on Thursday, and another is scheduled for tomorrow! While waiting for a ride yesterday morning I decided to browse all of the Halloween items in the Scale Miniatures section of Etsy. There were over 800 listings! So much to choose from, I only made it through the first few pages to set up this treasury. Think I'll go back and browse a little more tonight ;)

During the month of September and into the first part of October I finished the dolls I currently have, then made clothes for everybody. Some of the dolls have more than one outfit because all scale dollhouse dolls aren't the same size. I made an outfit for a particular doll, then it wouldn't fit, so it became part of the wardrobe for another doll instead.

In October I took a break from my personal dollhouse world to make miniature flowers and get back to some of the miniature pottery I had started way back in May. I'm not sure how often I can play with my own miniature community for the rest of the year, so everybody is just hanging out now... 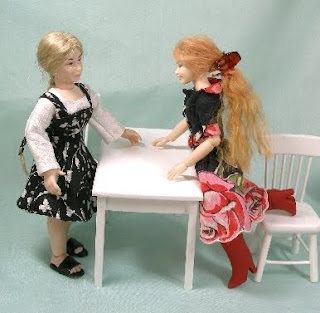 These girls are Heidi Ott dolls. They are very different in size, can't share clothing. The girl on the right is slender and sort of tall, the one on the left is short and sort of stocky built. 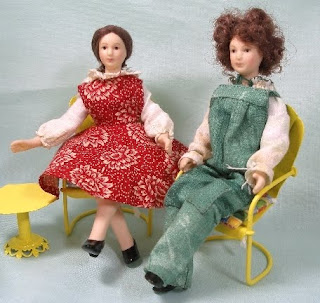 These dolls were from a set of Porcelain dolls that weren't finished, and had clothing glued on. I learned how to finish a doll with these, and their clothing is some of the first I made (got much better at it as time went on). The furniture these dolls are sitting in are by InsideOutMinis on Etsy. 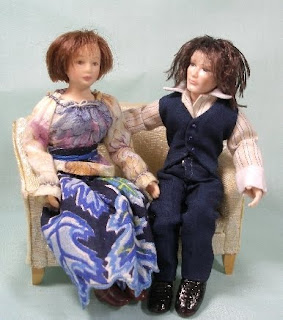 The doll on the left was a young boy in the Porcelain doll set. I thought it looked too feminine to be a boy, so finished it to be a girl instead. The man on the right is a very short man by Heidi Ott. The shirt he's wearing was from a kit. The mens shirts I made after that (from a pattern I'd made) came out much better fitting and looked more realistic too. 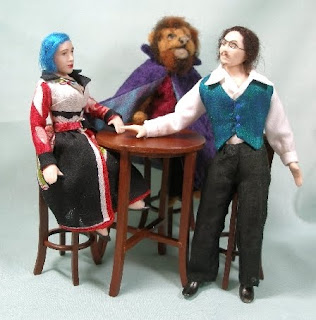 These dolls are from Hanna, and the only ones that have names and personalities so far. The lion is dressed because he's more like the character Harvey from the book/movie, and will probably be a sidekick character to someone once the bar/lounge is a place for everyone to hang out in. This picture is showing my favorite clothing from all that I made so far. At first, I didn't intend for Francesca to wear anything so tailored, but the dress is "arty" in the fabric pattern, so it works out to be a part of her wardrobe. I really, really like Vincent's clothes, they fit so well and are classy looking to me too. 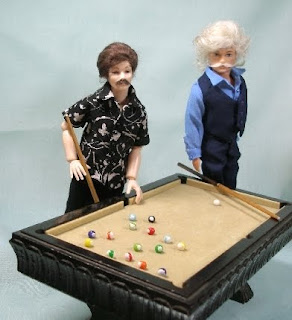 The doll in casual clothing is the tall man doll from Heidi Ott. He originally had a blond crew cut hair do, but I didn't like that so changed it. His hair is tied back in a pony tail right now because I haven't decided how to cut and style it yet, I may leave it the way it is.

The older man doll started as the Gary doll from the Dawn doll set. His original hair was just formed from the plastic the doll is made from. I also redid his face so he wasn't so cartoonish. He's a little too tall right now because the only shoes I had that would fit him have heels giving him another 1/4" (four inches) in height. I will eventually get him some flat shoes to make him closer to scale.
Posted by Joyce 2 comments: 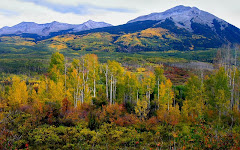